Oxbridge – could it be the place for you?

Just as there’s no such person as Brangelina, there’s no such place as Oxbridge. Like the popular amalgamation of the names of Mr Pitt and Ms Jolie, the word is slang for the two oldest universities in England – Oxford and Cambridge.

Going strong for hundreds of years, both institutions have a history of academic excellence that’s recognised throughout the world and this proves off-putting to many students who, deep-down, like the idea of going but think they will have no hope of getting in. But should it put you off too?

Oxbridge stereotypes are just that

The truth is that many ordinary, down-to-earth students from comprehensives, even those in the north of England and beyond, do get into study at either Oxford of Cambridge. Yes, so do a lot of students who went to grammar schools or public schools, but the same is true of any university.

The best way to make a decision about whether Oxford or Cambridge is for you is to go to one of the many open days held at different colleges throughout the year. Talk to current students, see the way the university is laid out, get a glimpse of what its really like. Make up your own mind rather than believe the stereotypes.

Surely entry requirements are straight As?

Competition for places is high, so entry requirements tend to be high too. Many students who start in their first year have achieved straight A grades at A level, AS level and GCSE too. But the picture is more complex; Cambridge and Oxford both have admission tests, they require submission of written pieces, they are more likely to interview you, and their selection process is more personal than some other universities. There certainly are people who get in because of other factors and it is not unusual to meet students in Fresher’s week who feature a B or two on their exam certificates.

Having said that, the universities of Oxford and Cambridge stay at the top of academic achievement league tables year after year because of hard work and high expectations. To enjoy your time studying at either institution you need to be interested in academic thinking and work, have a passion for your subject, and want to pursue it to great depths. Your lecturers and tutors will enjoy challenging you, and the more you get into debate and discussion, the richer your experience will be.

Terms at both universities are shorter than most – 8-9 weeks – and so there is a lot of work to cram in. Lectures and practicals (depending on your course) take place in the day, with small group discussion and study with a personal tutor taking place in the early evening. These really are small groups with one tutor to two to three students. Called tutorials and Oxford and supervisions in Cambridge, these provide the opportunity for engaging directly with cutting-edge researchers, some at the very top of their field. 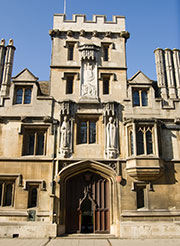 If you are passionate about your subject, the course is on offer and you like either place after visiting and talking to current students, there is no reason not to. Just over 5200 students got into Oxford or Cambridge in 2011, so its clearly not impossible.

Your application should be based on sound GCSE and AS results, a strong personal statement emphasising your academic interests and also your sporting and extra-curricular activities. Your statement gets sent to your other choices too, so it make sense not to mention Oxbridge by name.

Remember: The only students guaranteed not to get a place at Oxbridge are those who don’t apply.