Pathology: the science behind the cure

Pathology is the study of disease. Pathologists work with doctors and nurses in hospitals and GPs' surgeries to diagnose, treat and prevent illness.

Isn't all about dead bodies?

No, but you wouldn't be alone if you thought this. A survey found that over two thirds of people thought that pathologists worked only with the dead, as shown in television programmes like CSI and Silent Witness. In fact, although some pathologists do perform autopsies (also called 'post mortems'), this is only a small proportion of their work and the majority of pathologists work for the benefit of living patients. Every time someone has a blood test, cervical smear or a lump removed, it's a pathologist who looks at the specimen to work out if there's any disease present or not.

Pathologists don't all do the same job

There are 19 different specialties, with their own training programmes and exams. Pathologists work in laboratories, in clinics and on hospital wards.

What qualifications will I need? 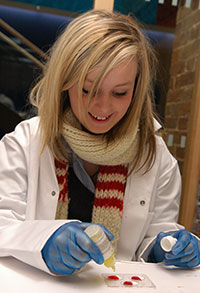 To work as a pathologist in any of the pathology specialties you need to qualify as a doctor first before going into pathology training.

So to become a pathologist you need to go to medical school for 5 or 6 years first. You will need good A level results to get into medical school. Most students take a combination of maths, chemistry, physics and biology and obtain A grades.

How much could I expect to earn?

You don't have to be a doctor…

In addition to medically qualified pathologists who have completed a medical degree, there are other types of experts are also needed within the various pathology specialties:

You can find out more about pathology at the Royal College of Pathologists or on our Facebook page.