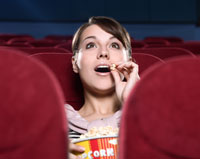 There are several types of course that come under the broader heading of Film and Television. The most important distinction to be made is between theoretical courses and practical courses. If you're a budding Spielberg who dreams of crafting a summer blockbuster you need to choose a practical course, where you will learn about each aspect of filmmaking. These courses are generally assessed through a combination of written and practical work, so suit creative people with the drive and ambition to get projects off the ground. If you're happier in front of the big screen than behind a camera, a theoretical Film and/or Television Studies degree might be more suitable. Here you'll learn a variety of ways to 'read' film and television media, completing written work based around the analysis of a diverse selection of texts.

Some Courses in Film and Television: