More than meets the eye

You may have the idea that Bournemouth is a sleepy seaside town where people retire to. Some may, but the town of Bournemouth is far from sedate. Not only does it have two major tertiary education centres, it has an international airport, good rail links to London and the rest of the UK and easy access to cross-channel ferries. In recent years, Bournemouth has attracted major investment in leisure facilities, business and tourism and has a thriving collection of pubs, clubs, and restaurants. With several choices for tertiary education also available in the town, Bournemouth has a lot going for it. 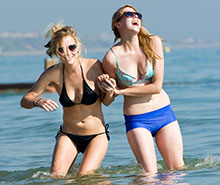 Living as a student in Bournemouth you can take advantage of the 7 miles of sandy beaches, some of the best in Britain, during the summer months. Sailing and all types of water sports are available and the Sailing Academy, built for the Olympics, is a short distance away in Weymouth. The Bournemouth International Centre and Bournemouth Pavilion offer live events every week of the year, including live gigs, classical concerts, top-named comedy performances (Paul Merton was here in April 2012) as well as skating and dance championships.

The University of Bournemouth has an increasingly good reputation as a specialist in media and applied sciences, but it offers much more. It was a finalist for the Times Higher Education prize for University of the Year 2009; Bournemouth didn’t win, but being close second is an indication of how well the institution is regarded.

The Bournemouth University Students Union is one of the most active and proactive in the country. The university buildings and centres are split into two but all facilities are within a 5 mile radius and inter-campus buses run frequently. The town is also well equipped with safe cycling routes.

Other possibilities for studying in Bournemouth