Recent surveys done by the Independent Student Finance Taskforce has revealed that around 60% of today’s students are anxious about paying back their loans because they simply don’t understand how it will work. Parents are worrying too and the culture of ‘I’m not even going to try for university because I don’t want to be in debt’ is becoming a problem.

Some common myths about student loans

Before you waste time worrying, or worse still, miss out on the chance to apply to uni because you think it’s going to be too expensive, start researching the facts. Our top 7 myths and the reality behind them is a good start.

Myth 1: I haven’t got enough money to go to uni

Student fees are not paid up-front. All UK students get a tuition fee loan and a maintenance loan and only have to pay these back starting the April after graduation and then only if they earn over £27,295 per year.

Real-life example: a student with fees of £8500 per year has that fee paid. All students have access to a maintenance loan. You won’t be rich at uni, but you won’t be penniless.

Myth 2: My fees are so high; I’ll never afford the repayments

Myth 3: Compared to my older brother/sister, my loan repayments will be sky-high

Previously, the threshold for starting to pay back your student loan was much lower, so you had to start paying it back earlier. The repayments were still calculated on a percentage of your income above that threshold so even if your older sibling has a lower loan overall, their initial payments after graduation would actually be higher than yours.

Myth 4: my student loan will give me a bad credit rating

Student loans are not taken into account when your credit rate is determined, so having a student loan will not prevent you from getting a mortgage or taking out other loans.

Myth 5: I won’t be able to earn enough to make the repayments 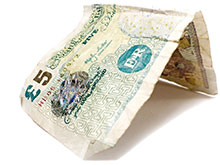 Student loans are only paid back when you earn over the £27,295 threshold. If you start on a good graduate salary and then are made redundant and don’t work for a while, or take a lower paid job, your payments will stop. There are no debt collectors – you will never be forced to pay back your student loan unless you are earning the money to do so.

Myth 6: I will be repaying my student loan forever

You won’t have to carry on paying until the entire amount and interest is paid back – all debts are going to be wiped after 30 years. If you earn less than £27,295 (or whatever the threshold rises to in subsequent years), you theoretically will never pay any of it back.

If you have well-off parents, or have inherited some money from a grandparent, it is tempting to think this is a good idea. But, think about it. You don’t know what you will end up earning, and you don’t know how the threshold will change. You may end up paying 100% of your tuition fee upfront but, eventually, only end up paying half of it back in repayments.